Back to the overview
Categories
Personal advice
Would you like advice or inspiration? Then please contact one of our advisers without obligation.
Contact us
More about Nenko

What is Robotherapy?
Robotherapy is a (non-pharmacological) therapy that consists on the use of robots as an element of play and company, in people with advanced cognitive impairment. (a disturbance in one or more cognitive functions. This can cause problems with memory, language, behaviour and problem solving).
The morphology of these robots can be varied but all coincide that they are endowed with artificial intelligence and multiple sensors that allow them to respond to external stimuli and interact. The function of therapeutic robots is to generate mental effects such as pleasure and relaxation through physical interaction with people. Therapeutic robots with animal morphology are considered an alternative to assisted therapy with animals, avoiding the complications derived from the presence of animals in the centers and producing similar effects.
Purpose and Scope of the Study
In 2018 AFEDAZ and UNAMIQO have joined their efforts to carry out a study with the purpose of analyzing the psychological, physiological, cognitive and social impact of the use of psychorobots in users with advanced cognitive impairment.
The robots
For this project 2 robots with cat morphology were used; 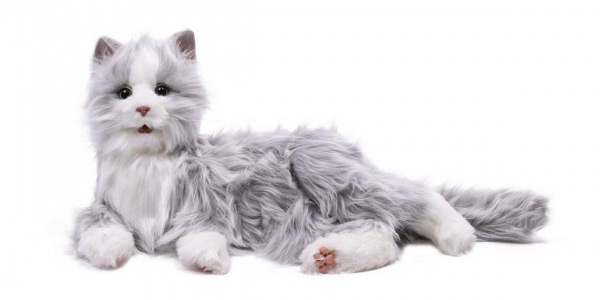 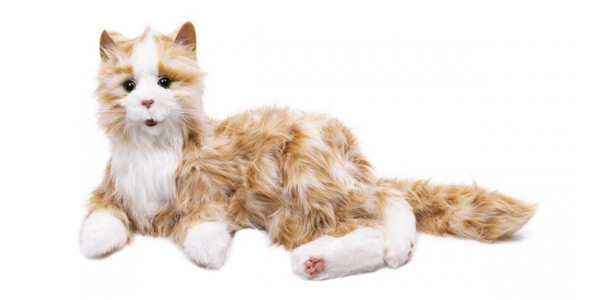 These robots have fur and movements that closely resemble real cats. These robotic cats react to the touch emitting typical cat sounds (purrs and meows) and moving different parts of the body (ears,head, torso, legs). With their movements they emulate the reaction of a cat when it is caressed. If the user stops caressing him, the robotic cat will meow for the user's attention, if the time elapsed is too high, the cat will go to sleep.
The Sample
6 users (5 women, 1 man) with a high level of cognitive impairment (GDS: 5-7) were selected.
The sessions
The sessions took place during 6 weeks at the time and place of the usual therapeutic activities in rooms of about 15 people. The interaction sessions with the robot were free and lasted approximately 20 minutes. These sessions have allowed to measure the level of interaction and link of the user with the psychorobot, as well as to assess whether the psychorobot acts as a driver of the user's interaction with their peers and staff.
Methodology:
The therapists were in charge of observing the behaviors of the users and filling out some questionnaires that collect questions about the nature of the interaction with the cat, and the emotional and functional impact on the observed user.
Results:
● Participants perceive the cat as real and so they treat it.
● The robotic cat has given a sense of purpose to the participants who have assumed the role of providing care to the cat, "my cat" "I will take care of you", the realization of having a pet has aroused the feeling of being accompanied which has resulted in a decrease in the feeling of loneliness.
● The robotic cat has been a social agent for all participants, who have as such used the cat to interact with staff and other residents.
● For all users there has been a significant increase in liveliness / activity and level of joy from levels 1-2 to levels 5.
● The robotic cat has been a source of greater occupation, in relation to other therapeutic activities (painting, puzzle, balls), since it has kept them stimulated for a longer time.
● Participants have experienced an increase in the topic of conversation, which has resulted in an improvement in speech.
● It has been observed that the cat causes a "cognitive awakening" this means that after the session with the cat, they are able to concentrate on other activities (coloring, do a puzzle, manipulating balls) that before the session with the cat, they would not have had no motivation to do.
● Those participants who accused erratic wandering have seen their walking significantly diminished.
● The participant who suffers from parkinson's and can not move any limb, makes great efforts to reach the cat and touch it. Her motor skills were significantly stimulated.
● An increase in interaction with the psychorobot was observed as the sessions progressed, the participants linked with the cat.
● Those participants who suffer from high levels of agitation have seen their agitation decreased in a very pronounced way, to minimum values in the presence of the robot. All participants experience relaxation during the sessions.
● Most of the participants do not stop petting the cat during the whole session, the direct contact with the fur of the cat comforts them as they have a sense of companionship.
● The cat has NOT caused adverse effects in the participants.
Staff testimonial
"We’ve discovered a suitable activity that stimulates users so they are able to keep attention and occupation during a long time. In this way, the time of the occupational therapy staff can be distributed to the rest of the group's users.
Emotionally the robot has been able to awaken in them "hidden" emotions such as comfort, joy, affection, empathy, socialization, among others ... "

About AFEDAZ
The Association of Relatives of Alzheimer Patients (AFEDAZ) is the largest reference for Alzheimer's Aragon, being Aragón the most aging population in Spain with more than 21% of the population over 65 years of age. Alzheimer's disease affects today 1 in 3 people over 60 years.
About Unamiqo
UNAMIQO a company dedicated to the distribution of psychorobots aimed at users with cognitive deficiencies. 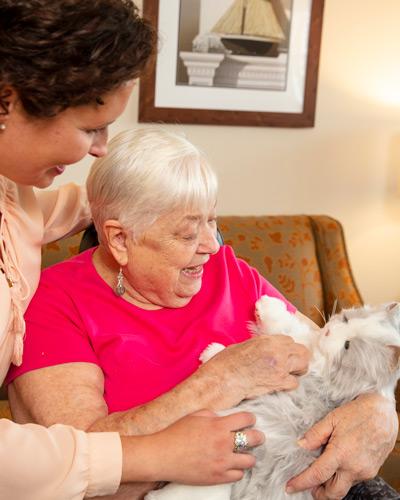 For which target group are you looking for a product? 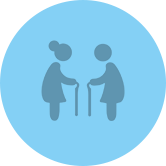 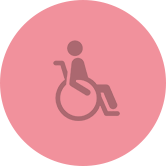 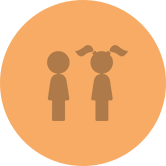 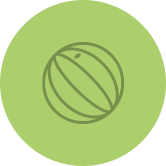 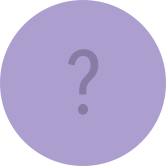 No specific target group
Continue to step 2
In which price range are you looking for a product? Drag the balls to change the price range
min € 0 - max € 1000
Back to step 1 Continue to step 3
Which sense (s) do you want to stimulate? 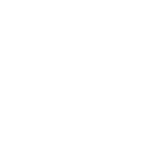 No specific sense
Back to step 2 View the products
You need to be logged in for this section.

NOT AVAILABLE FOR FOREIGN CUSTOMERS
With a credit card you can pay securely on the internet. You pay with the information on your credit card (MasterdCard, Maestro or Visa): - the name on the card - the card number, shown centrally on the front of your credit card - the expiration date (the month and year of the expiration date are on the front) - the validation code on Visa or MasterdCard (CVV or CVC) is a three-digit code on the back of your card. This code is an additional security check.
With PayPal, online payment is secure and protected. You do not have to keep your credit card at hand to make payment. Your bank account or credit card number is already stored securely in your PayPal account, so it is not necessary to enter your data endlessly. With PayPal you only need your e-mail address and password and you can safely pay online within a few clicks. PayPal is free for you as a buyer.
A transfer means that you transfer the money in advance via a regular bank transfer. You will receive an e-mail from Buckaroo with the bank account number, name of the beneficiary and of course the amount to be transferred. You need to transfer the amount within 7 days via a regular bank transfer.
As soon as we have confirmation of the moneytransfer, your order will be processed. If we have not received payment within 7 days your order will be canceled.
Note: during this period the delivery time of certain products may be changed!
You can deposit the amount shown on the order confirmation within 7 days into the account below. Tonce the amount is trnasferred and visible in our account the order will be sent, provided the product(s) are in stock.

Please make sure that your order confirmation number is always mentioned with your payment!
no information available
Not available
no information available
No information available
Do you want to be sure that the products ordered by you will actually be invoiced this year? We will then ensure that you do not encounter budget technical problems and that your budget of this year can be used even when products are not available at the moment.
AfterPay - AfterPay manages (for Dutch Citizens only) the entire post-payment process for www.nenko.com. This means you receive a digital invoice from AfterPay via email for payment of the product(s) purchased. If you are paying via AfterPay for the first time, the amount of the digital invoice can be a maximum of € 500 at www.nenko.com. If you are already known to AfterPay, you can pay a sum of up to € 500. AfterPay carries out a data check for approving your request to pay via digital invoice. AfterPay applies a strict privacy policy as described in its privacy statement. In the unlikely event your application to pay via digital invoice is not authorised, you can naturally pay for the product using another payment method. Please contact AfterPay if you have any queries. Please see the consumer section of the AfterPay website for further information.

Back
Product advice
Other countries